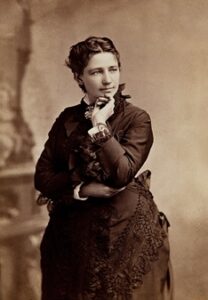 Victoria Woodhull was a suffragist and feminist writer who was a passionate campaigner for social justice. She was the first American woman to address the U.S. Congress and ran for President of the United States.

Born Victoria Claflin in 1838 in the small Ohio community of Homer in Licking County. She was the daughter of Reuben and Roxanna Claflin. Her family background was certainly an influence in creating what was a vibrant and radical personality. The Claflins were a nomadic family, making their living through a traveling medicine show, complete with “miracle cures” and fortune telling, with the whole family participating. From childhood, Victoria claimed to be clairvoyant.

On November 20, 1853, when she was fifteen years old, Victoria married Canning Woodhull, a physician; and they would have two children. In 1858, Victoria left Woodhull, who was an alcoholic and a womanizer, to make a living on her own. In 1864, she was working as a spiritualist in St. Louis, Missouri, when she met Colonel James Harvey Blood. After they divorced their spouses, the couple married in 1866, with Victoria keeping her surname. There was apparently no commitment to fidelity and Woodhull and Blood practiced “free love.” Victoria co-wrote Origin, Tendencies and Principles of Government, a treatise on free love and shared property, which was published in 1871.

Victoria and her sister Tennessee moved to New York City in 1868 where they became stockbrokers and opened the firm Woodhull, Claflin and Company in 1870. It was the first Wall Street investment firm owned and operated by women. That same year, the sisters also founded a newspaper, Woodhull and Claflin’s Weekly. The publication was used as a means to publicize Victoria’s advocacy for equal rights for women, birth control, divorce law changes, labor rights, and tax reform. One issue reprinted Karl Marx and Friedrich Engels’s The Communist Manifesto was first published in America (1848). The Weekly ceased publication in 1876.

Victoria ran for president in 1872, at the age of 34, at a time when women were not even allowed to vote. Her running mate was Frederick Douglass. They were defeated, but Victoria’s speeches in favor of women’s suffrage before the House Judiciary Committee in 1871 helped sway many former opponents to her side.

After a divorce from James Blood, Victoria moved to England. In 1883, she married John Biddulph Martin, a wealthy English banker. Later in life, Victoria changed her views on free love as she began to speak of the “free love of God.” She continued writing and lecturing as she spoke of her belief in the Bible and in the sacredness of motherhood.