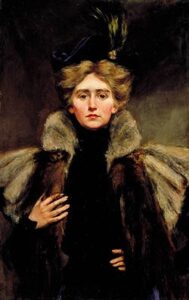 Natalie Clifford Barney was born in Dayton, Ohio, in 1876, the daughter of Albert Clifford and Alice Pike Barney. She was educated at Les Ruches boarding school in Fountainbleau, France, and completed finishing school at Miss Ely’s School for Girls in New York City. She studied fencing, dancing, and violin in Germany. She became a poet, novelist, dramatist, translator, and editor. She founded and managed a literary salon in Paris from 1909 until 1969. As part of her salon, she established “Academie des Femmes,” to be of assistance to female writers. Barney`s works include Pensees d`une Amazone, Adventures de l`espirit,Souvenirs Indiscrets, and Traits et Portraits. She became something of a legend in France, but was not as well-known in her native America. Barney was considered to be a pioneer in the development of feminist and lesbian literature and culture. She was especially outspoken about her lesbianism. She was the companion of Romaine Brooks for more than fifty years.

Awards/Honors
In 1979, Barney was honored with a place setting in Judy Chicago’s feminist work of art The Dinner Party.