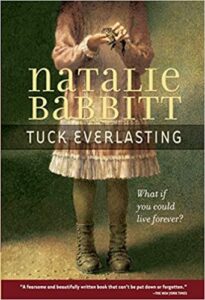 Born Natalie Zane Moore on July 28, 1932 in Dayton, Ohio, esteemed writer and illustrator Natalie Zane Babbitt was inspired by Sir John Tenniel’s illustrations in Alice in Wonderland to work with pen and ink, which became her specialty. She graduated from the Laurel School, a private academy for girls near Cleveland, and in fall 1950 she entered Smith College in Northampton, Massachusetts. While taking art classes at Smith College, she met Samuel Babbitt; they married in 1954 and had three children.

Babbitt’s first book as an illustrator, The Forty-Ninth Magician, was published in 1966; it was written by her husband Samuel. In addition to her own fiction, Babbitt illustrated numerous books, including Peacock and Other Poems (2002) by Valerie Worth. Although recognized as a writer for children, Babbitt’s gift of storytelling is also appreciated by older readers. The author of nineteen books, Babbitt’s entertaining narratives, sense of humor, and courage in focusing on challenging themes firmly established her as an important and respected writer. Her award-winning titles include Knee-knock Rise (1970); the enduring favorite, Tuck Everlasting (1975) and Ouch!: A Tale from Grimm (l998). Her other books include:  Jack Plank Tells Tales (2007) and The Moon Over High Street (2011). In 2012, Babbitt was awarded the inaugural E.B. White Award for achievement in children’s literature by the American Academy of Arts and Letters.

Natalie Babbitt died in her home in Hamden, Connecticut, on October 31, 2016.