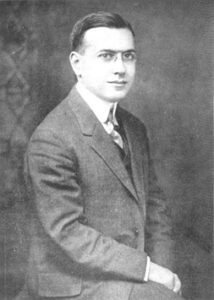 Earl Derr Biggers was born and raised in Warren, Ohio, the son of Robert J. Biggers and Emma Derr Biggers. He received a B.A. from Harvard University in 1907. He was a columnist and drama critic for the Traveler newspaper in Boston, Massachusetts, from 1908 until 1912, and a playwright and novelist from 1912 until his death in 1933. Biggers wrote a number of plays and novels between 1912 and 1925, but it wasn’t until the publication of his first “Charlie Chan” novel in 1925 that his popularity soared. The first volume, entitled The House Without a Key, first appeared in serialized form in The Saturday Evening Post. Biggers’ stories of the Chinese investigator Charlie Chan, who worked for the Honolulu Police Department, became immensely popular and were also made into numerous film versions. In addition to The House Without a Key, the Chan books included such titles as The Chinese Parrot, Behind That Curtain, and Keeper of the Keys. Biggers’ non-Chan books included Seven Keys to Baldpate, Love Insurance, Inside the Lines and The Agony Column. Plays that he authored included If You’re Only Human, Inside the Lines, and A Cure for Curables. Biggers married Eleanor Ladd in 1912 and they had one son.