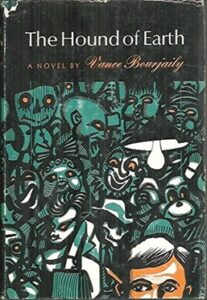 Vance Nye Bourjaily, the son of Monte Ferris Bourjaily (journalist) and Barbara Webb (writer), was born in Cleveland, Ohio, in 1922. His parents separated when he was eleven years old, and Bourjaily spent his childhood growing up in Connecticut, New York, and Virginia. In 1939, he graduated from Handley High School in Winchester, Virginia, after which he enrolled in Bowdoin College in Brunswick, Maine. He left college in 1942 to join the military. Bourjaily served in the American Field Service (ambulance driver, 1942-44) and the U.S. Army (infantry, 1944-46). In 1947, he received his B.A. from Bowdoin College. He married Bettina Yensen in 1946; however, the marriage ended in divorce. In 1985, he married Yasmin Mogul. Bourjaily was the father of three children.

Bourjaily published nine novels. World War II and its meaning for Americans of his generation are central themes of his early fiction. His first novel, The End of My Life, was published in 1947. Other novels followed that include The Hound of Earth (1955), The Violated (1958), Confessions of a Spent Youth (1960), The Man Who Knew Kennedy (1967), Brill Among the Ruin (1970), The Great Fake Book (1987), and Old Soldier (1990). Bourjaily was also an essayist, playwright, and educator. He taught creative writing for more than twenty years (1957-1980) at the Iowa Writers’ Workshop, University of Iowa, and five years at the University of Arizona prior to becoming, in 1965, the first director of the Master of Fine Arts program in creative writing at Louisiana State University. His works of nonfiction include The Unnatural Enemy: Essays on Hunting (1963), and Country Matters: Collected Reports from the Fields and Streams of Iowa and Other Places (1973).