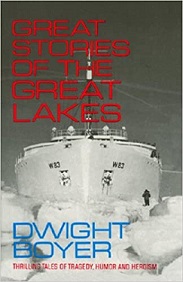 It was perhaps fate that an Elyria native, born in the same year as the tragic sinking of the Titanic, should devote his life to authoring books about life and death onboard ships.

Dwight Boyer was born in Elyria, Ohio, on November 18,1912, and moved with his family to Mentor, Ohio, when he was young. Boyer began taking photographs while a student at Mentor High School and sold some of his pictures to newspapers on a free-lance basis.

In 1937, Boyer married Virginia Stokes, and they had one son. Boyer was a reporter, photographer, and historian of the Great Lakes. His first job was in 1943 with the Erie Daily Times (Pennsylvania). He began his career working for the Toledo Blade (Ohio) in 1944 and then The Plain Dealer in 1954. Boyer authored five books on the Great Lakes and won many awards during his 23 years as a photojournalist for The Plain Dealer in Cleveland, Ohio.