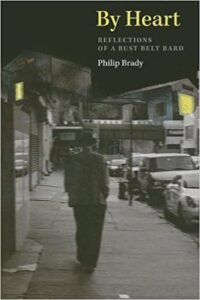 Poet, publisher, educator, and writer Phillip Brady was born and raised in New York City. Brady received a B.A. from Bucknell University, M.A.’s from the University of Delaware and San Francisco State University, and a Ph.D. in English from SUNY Binghamton; he has been an Ohio resident since 1990.

Brady has taught at University College Cork in Ireland, and served as a Peace Corps Volunteer at the National University of Zaire and in the Semester at Sea Program. Currently, he is Distinguished Professor of English at Youngstown State University (YSU). He is Founder and Director of the YSU Poetry Center (1994 – present). Brady also serves on the low-residency MFA faculty of Wilkes University and is Executive Director of Etruscan Press, a national literary publishing house which he co-founded in 2001. Etruscan publishes books in five genres and has produced two National Book Award Finalists. Brady’s poetry and essays have appeared in over fifty journals in the United States and Ireland, including:  American Literary Review, Poetry Northwest,  Abraxas, The International Poetry Review, The New Virginia Review, The Spoon River Poetry Review, Cincinnati Poetry Review,  Pacific International, The Belfast Gown Literary Supplement,  and The Journal of Irish Literature. Brady first poetry collection, Forged Correspondences, was published in 1996; his other collections include Weal (2000) and Fathom (2007), and To Banquet with the Ethiopians: A Memoir of Life Before the Alphabet (2015). His books of non-fiction include To Prove My Blood: A Tale of Emigrations & the Afterlife (2003); By Heart: Reflections of a Rust Belt Bard (2008), Poems & Their Making (editor, Etruscan, 2015). His latest book is The Elsewhere: Poems & Poetics (Broadstone, 2021).