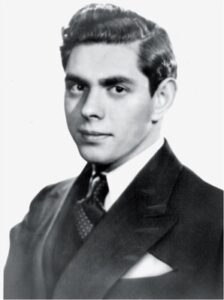 Joseph Shuster was born July 10, 1914, in Toronto, Canada, and moved to Cleveland with his family at the age of ten. From an early age Joe Shuster demonstrated a penchant for drawing, scrounging paper from various sources as his family was not wealthy. Shuster, along with boyhood friend Jerry Siegel, created Superman, one of the most recognizable fictional characters of the 20th century.  Siegel created the character of Superman, his background story and superpowers, while Shuster worked as the artist, rendering Superman in his now familiar tights and cape.

In 1938, Superman was chosen as a cover feature for Action Comics #1, published by the future DC Comics. Almost overnight, Superman became a gigantic success. Famously, Siegel and Shuster signed away rights to Superman for only $130, so they did not benefit greatly from the Man of Steel’s incredible financial gains.  A series of lawsuits throughout the 50’s, 60’s, and 70’s resulted in the pair receiving a modest pension from DC comics, as well as a guarantee that future Superman comics, programs, and other products would give credit to the two original creators.  Joe Shuster passed away July 30, 1992, in Los Angeles.