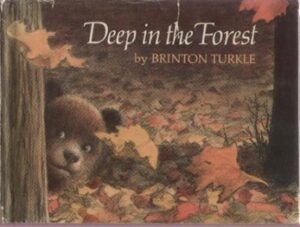 Brinton Cassaday Turkle was an author and illustrator of twenty children’s books; he wrote about overcoming adversities, the power of truth, and reverence for all living creatures. During his career, Turkle illustrated over 100 books for other authors.

Born on August 15, 1915, in Alliance, Ohio, Turkle was the son of Edgar Harold and Ada (Cassaday) Turkle. As a boy he enjoyed drawing, reading, music, and theater. A family friend, Gertrude Alice Kay, a children’s author and illustrator, encouraged Turkle to pursue his creative interests. Following his graduation from high school, Turkle enrolled at the Carnegie Institute of Technology in Pittsburgh, PA (now Carnegie-Mellon University) and studied theater arts from 1933 to 1936. Deciding that opportunities in theater would be limited, Turkle began to develop his drawing skills and studied at the School of the Boston Museum of Fine Arts from 1938 to 1940. Turkle worked in advertising for several years before becoming an illustrator of children’s books, with the publication of Timber Line Treasure (1951), a book of children’s poetry by Adrien Stoutenburg. Turkle married Yvonne Foulston in l948 and the couple moved to Santa Fe, New Mexico, that year.

In 1959, Turkle moved to New York City to focus on a career in writing and illustrating. He illustrated books for many authors including: The Boy Who Didn’t Believe in Spring by Lucille Clifton and Mr. Blue by Margaret Embry. Turkle wrote and illustrated Obadiah the Bold (1965) about a precocious Quaker boy in early nineteenth century Nantucket; Turkle created more stories about “Obadiah” that include: Thy Friend, Obadiah (1969), The Adventures of Obadiah (1972), for which Turkle was awarded the 1970 Caldecott Honor, and Rachel and Obadiah (1978). In 1977, Turkle won the Ohioana Award for Deep in the Forest (1976), a wordless twist on “Goldilocks and the Three Bears.” Turkle returned to Santa Fe, New Mexico, in the 1970s and was active in local theatre productions and Quaker meetings. Continuing to illustrate his own and other authors’ writings, he also made many trips back to Ohio for programs at his hometown library. It was always his hope that he could impart to his readers an appreciation for integrity, mutual respect, kindness, and reverence for life. In 2001, he was honored by the state of New Mexico with the Governor’s Award for Excellence in the Arts.

Brinton Cassady Turkle passed away on Thursday, October 9, 2003; he was 88 years old.

Awards/ Honors
1968 Lewis Carroll Shelf Award for The Fiddler of High Lonesome; 1970 Caldecott Medal honor for Thy Friend, Obadiah; 1976 Ohioana Award for Deep in the Forest; Governor’s Award for Excellence in the Arts for state of New Mexico, 2001.