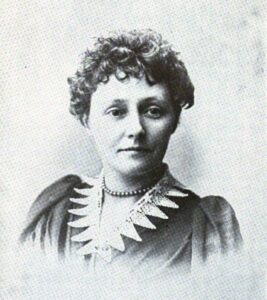 Mary Hartwell Catherwood was born in Luray, Ohio, in 1847. Her parents, Marcus and Phoebe Thompson Hartwell, both died when she was 11, leaving her and two siblings to be raised by grandparents in Hebron, Ohio. She was highly motivated, beginning a career as a schoolteacher at age 14. She also did tutoring, saving money to attend college. She received a B.A. from Granville Female College in 1868. She continued to teach until 1874, after which she turned to a career in writing. She began to move around the country, living in New York, Ohio, and finally in Illinois, where she married James Catherwood in 1877. She became a prolific writer of short stories and novels for both children and adults. Her early books were largely local-color stories from the Great Lakes region. After the popularity of her novel The Romance of Dollard (1889), Catherwood turned to writing romantic historical fiction. Many of her writings focused on the French in America and their Native American neighbors. Catherwood’s female characters tended to be self-reliant, independent women, a theme that would become more prominent in the literature of the twentieth century. Her other books include The Story of Tonty (1890). The Lady of Fort St. John (1891). Old Kaskaskia (1893), The White Islander (1893), The Chase of St. Castin and Other Stories (1894), The Days of Jeanne d’Arc (1897), Heroes of the Middle West: French (1898), Mackinac and Other Lake Stories (1899), The Queen of the Swamp and Other Plain Americans (1899), Spanish Peggy (1899), Heroes of the Middle West (1901), and Lazarre (1901) Her children’s books include The Dogberry Bunch (1880), Rocky Fork (1882), and Old Caravan Days (1884).

Mary Hartwell Catherwood died of cancer in her home in Chicago, Illinois, on December 26, 1902.