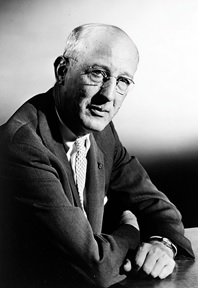 It was no accident that the most prominent figures in Bruce Catton’s Civil War histories were fellow Midwesterners and personal heroes Abraham Lincoln and Ulysses S. Grant. Born in Petosky, Michigan, Catton attended Oberlin College and became a reporter after serving briefly in the U. S. Navy during WWI. Writing for the Cleveland News, the Boston American (1920-24), and the Cleveland Plain Dealer (1925), Catton remained in the newspaper business until the outbreak of WWII, when he became information director for the War Production Board in Washington, DC. These experiences led to Catton’s first book, The War Lords of Washington (1948). Although the book attracted little attention at the time, it changed Catton’s future: he left government service to write history. His first major project was a trilogy on The Army of the Potomac. It comprised Mr. Lincoln’s Army (1951), Glory Road (1952), and A Stillness at Appomattox (1953). This third title was the first to attract a large readership and won both the Pulitzer Prize in history and a National Book Award in 1954. Catton’s second major trilogy on the war, The Centennial History of the Civil War, attempts to tell the whole story of the war and its impact on both sides in The Coming Fury (1961), The Terrible Swift Sword (1963), and Never Call Retreat (1965). A prolific writer and reviewer as well as editor for American Heritage  magazine, Catton became senior editor in 1959 and held that position until his death. The magazine flourished during his tenure as editor and reflected Catton’s varied interests that reached far beyond the Civil War. Catton’s ability to make history an emotional as well as intellectual experience and present facts from the perspectives of common people helped popularize history for the non-historian and make it come alive for readers.