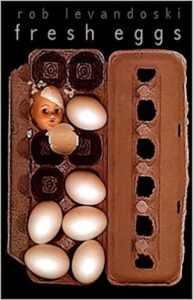 Robert C. Levandoski was born June 5, 1949, in the Bennett’s Corners area where Hinckley Township, Brunswick, Strongsville and North Royalton converge. His father, Clyde was a storekeeper and Edna (Wildenheim) was his mother. Rob Levandoski, author of Fresh Eggs, tapped into his Medina County roots in penning his novels and mysteries.  Levandoski attended a few local colleges (Lorain County Community College and Cleveland State University) after graduating from Brunswick High School in 1967. He pursued a career in journalism. He covered police and schools, wrote for the entertainment department and snapped pictures during his four years with the Medina County Gazette. Afterwards, Levandoski took a public relations job with Brunswick schools and edited political science textbooks for a Brunswick publishing company. He served as managing editor of Beverage Industry Magazine from 1985 until 1993, when it was sold to a Chicago company. Levandoski did some freelance work while writing his first novel, Going to Chicago. The book, published in 1997, told the story of two boys from rural Ohio going to the Chicago World’s Fair in the 1930s. He continued spinning tales based on people and places in Northeast Ohio with Serendipity Green in 2000 and Fresh Eggs in 2002. He wrote the three books for the Morgue Mama Mystery Series under the pseudonym C.R. Corwin. Levandoski also wrote book reviews that appeared in The Plain Dealer and taught writing courses at the University of Akron.

Rob Levandoski died of a brain aneurysm and heart attack in Akron on September 8, 2008, at age 59.

Awards:
Nominated for the Pultizer Prize for his 2002 novel Fresh Eggs.