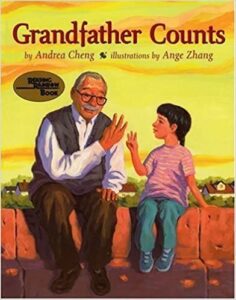 Children’s book author and educator Andrea Cheng was born in El Paso, Texas.  The daughter of Hungarian immigrants who grew up and lived most of her life in Cincinnati, Ohio, she and her two siblings grew up in an extended family, which Cheng once described as being “three generations under one roof.” In 1979, after graduating from Cornell University with a BA in English and a master’s degree in Teaching English as a Second Language, Cheng went to Switzerland, where she learned French, taught English, and apprenticed to a bookbinder. Upon her return to the United States, she went back to Cornell to study Chinese and got an MS in linguistics. In 1982 she married Jim Cheng, whom she met during her studies. They raised three children.

Cheng was aware at the age of eleven that she wanted to become a writer. During her career, she authored more than 20 books for children and young adults. Her books often focused on intercultural and inter-generational relationships.  One of her more personal works is the middle-grade novel in verse Brushing Mom’s Hair (2009), which is based on Cheng’s experience of undergoing breast cancer treatment and how it affected her teen daughter at the time. In 2013, Cheng published Etched in Clay: The Life of Dave, Enslaved Potter and Poet, and in April 2017 The Year of the Garden, a prequel to the four books in the series, was published.

In addition to her writing, Cheng taught English as a Second Language and Children’s Literature at Cincinnati State Technical and Community College.