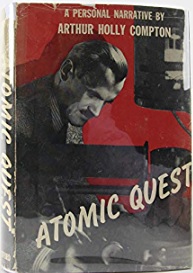 Arthur Holly Compton, son of Elias and Otelia Catherine (Augspurger) Compton, was born in 1892 in Wooster, Ohio. His father was a Presbyterian minister, professor of philosophy and dean at the College of Wooster. Six members of the Compton family eventually received a total of more than seventy earned and honorary degrees. Arthur Compton was educated at the Wooster Elementary and Grammar School and the Wooster Preparatory School. He graduated from the College of Wooster in 1913, by which time he had already devised a method for demonstrating the earth’s rotation. He then went on to Princeton University, where he began the serious study of physics, receiving an M.A. in 1914 and a Ph.D. in 1916. Compton married Betty Charity McCloskey in 1916 and they had two sons. The early part of Arthur Holly Compton’s career was spent in research with Westinghouse Lamp Company in East Pittsburgh, Pennsylvania, and then at the Cavendish Laboratory of Cambridge University, England, where he worked on research relating to the structure of atoms. In 1920, he joined the faculty at Washington University in St. Louis, Missouri.

In 1922, Compton’s study of X-ray scattering led to an understanding of the “Compton effect.” This breakthrough demonstrated that electromagnetic radiation possessed both wave-like and particle-like properties, an understanding that laid the foundation for the investigation of quantum physics. Three years later, Compton joined the University of Chicago as Professor of Physics, where he remained until his subsequent return to Washington University in 1945 as its Chancellor. During all of this time, he continued to do research in physics, and during World War II he played an important role in the decision to develop the atomic bomb. Compton was awarded the Nobel Prize for physics with C.T.R. Wilson in 1927 for the discovery that both matter and energy can be interpreted in terms of particles or as wave phenomena. Compton authored six books that include X-Rays and Electrons: An Outline of Recent X-Ray Theory (1926), X-Rays in Theory and Experiment (1935), The Freedom of Man (1935), The Human Meaning of Science (1940), and Atom Quest: A Personal Narrative (1956).

Awards:
Compton was awarded one of the first National Research Council fellowships in 1919 and was awarded The Nobel Prize in Physics 1927. The American Nuclear Society established the Arthur Holly Compton Award in Education in 1966 in honor of the late Arthur Holly Compton to recognize and encourage outstanding contributions to education in nuclear science and engineering.