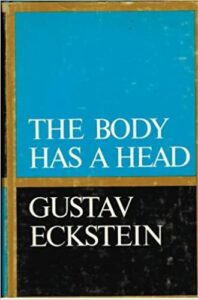 Gustav Eckstein, son of Gustav and Emma (Imig) Eckstein, was born in 1890 in Cincinnati, Ohio. He received a D.D.S. from the Cincinnati College of Dental Surgery in 1911 and a M.D. from the University of Cincinnati in 1924. He practiced dentistry from 1911 until 1918 and was also professor of chemistry at the Cincinnati College of Dental Surgery from 1911 until 1915. Eckstein was married briefly to Francesca Bendeke.

From 1922 until 1960, Eckstein served successively as instructor, assistant professor, associate professor, and professor of physiology at the University of Cincinnati. He was named professor emeritus in 1960. Eckstein’s writings cover a variety of fields. He wrote several plays: Hokusai (1935), Christmas Eve (1938), and The Pet Shop (1944). He wrote a novel, Kettle (1933), as well as a number of works of nonfiction that include Nogachi (1931), a biography on Japanese-American microbiologist Hideyo Noguchi; Lives (1932); Canary: A History of a Family (1936) and The Body Has a Head (1969). Eckstein also contributed to The New Yorker, The Saturday Evening Post, Harper’s and the The Atlantic.

Honors
1971 National Book Award Finalist for The Body Has A Head.