Literary Cleveland‘s Read Ohio book talk and discussion series concludes the 2017 season with acclaimed young adult authors Mindy McGinnis and Cinda Williams Chima. The two will read from newly published work, discuss their approach to young adult writing, and engage with questions from the audience. This event will take place on Thursday, December 7 from 7-8:30 p.m. at Loganberry Books, 13015 Larchmere Blvd., Cleveland. It is free and open to the public. Register for this event. Read Ohio is presented in partnership with Ohio Center for the Book at Cleveland Public Library. 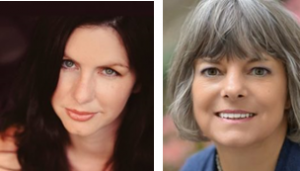 Mindy McGinnis has authored more than six books, including the post-apocalyptic thriller Not a Drop to Drink (2013); followed by the companion novel In a Handful of Dust (2014). In 2015, McGinnis published A Madness So Discreet, the Gothic historical thriller which became the 2016 Edgar Award winner for Best Young Adult novel.  In 2016, McGinnis published The Female of the Species, her first contemporary YA novel, and Given to the Sea, the first in a fantasy duology.  The psychological thriller, This Darkness Mine, was released in October. In 2018, McGinnis will publish Given to the Earth, the second in her “Given” duology.

Cinda Williams Chima writes fantasy fiction for teens of all ages. Her Heir Chronicles and Seven Realms fantasy series have both been New York Times bestsellers. Chima’s books have received starred reviews in Kirkus and VOYA, among others. They have been named Booksense and Indie Next picks, an International Reading Association Young Adult Choice, a New York Public Library Book for the Teen Age, to the Kirkus Best YA list, and the VOYA Editors’ Choice, Best Science Fiction, Fantasy and Horror, and Perfect Tens lists. Her books also appear on numerous state awards lists and won the Buckeye Teen Book Award in 2011. She lives in Ohio with her family, and is always working on her next novel.