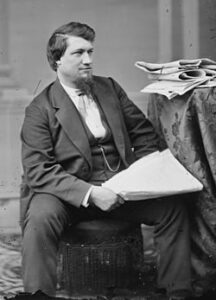 David Ross Locke (pseudonym Petroleum Vesuvius Nasby) was born in 1833 in Vestal, New York.  His family later moved to the village of Marathon, where he left school after completing grades 1-5. In 1845, at the age of twelve, David was hired by the Cortland Democrat to be an apprentice in the printing business. He completed his apprenticeship in five years, and moved on to the Corning Journal in 1850. In 1851 he moved to Cleveland, Ohio, where he worked for the Herald, and then The Plain Dealer. During his time in Cleveland, Locke began to develop a strong commitment to the rights of Negroes in America. After his time in Cleveland, he spent two years “tramping,” or traveling to different cities, working for a newspaper for a few weeks or months, and then moving on to another. He spent some time in the South, where he saw what he believed was unfair treatment of Negroes, and his commitment to the cause deepened. In 1853, he was hired by the Chronicle in Pittsburgh, where he worked as a compositor, reporter, and an assistant editor. Later that year, Locke and a fellow employee, James Robinson, moved to Plymouth, Ohio, where they bought the Plymouth Journal, changing its name to The Advertiser. He later became the editor of the The Jeffersonian in Findlay, Ohio. By 1865, he was editor and part-owner of the Toledo Blade. During the 1860s, he adopted the persona of “Petroleum Vesuvius Nasby,” ostensibly an ignorant and violently prejudiced slavery sympathizer. The rants of Nasby were first published as The Nasby Papers in 1864. Locke also went on tour, giving highly animated lectures as Nasby. His biting satire helped influence many people concerning the evils of slavery and racial prejudice. Nasby also focused on other social issues, such as voting rights for women, political expediency, and temperance. He wrote the novels A Paper City (1878), The Demagogue: A Political Novel (1890), and Strong Heart and Steady Hand, which ran as a serial in the Toledo Blade from May 17-August 2, 1888, but was never published in book format.

David Ross Locke died of tuberculosis on February 15, 1888, in Toledo.