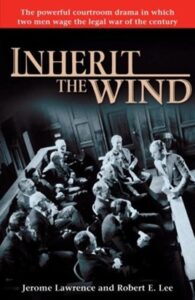 Jerome K. Lawrence, son of Samuel and Sarah (Rogen) Lawrence, was born in 1915 in Cleveland, Ohio. He received a B.A. degree from Ohio State University in 1937, and did graduate study at the University of California, Los Angeles, 1939-40. He had a long and varied career, including work as a newspaper writer and editor; radio and television writer, producer and director; playwright and director; and university professor. Lawrence is most famous for his collaboration on numerous plays with Robert E. Lee, with whom he founded Lawrence & Lee, Inc. Some of the plays Lawrence and Lee produced were Inside a Kid`s Head; Inherit the Wind; Shangri-La (musical); Auntie Mame; Mame (musical version of Auntie Mame); Only in America; Dear World (musical); The Incomparable Max!; The Night Thoreau Spent in Jail; Jabberwock; and First Monday in October. In an interview for Studies in American Drama, 1945 – Present, Lawrence described the plays he wrote with Robert E. Lee as follows: “Almost if not all of our plays share the theme of the dignity of every individual mind, and that mind’s life-long battle against limitation and censorship.” Lawrence was the writer and director of a number of radio programs, including Hollywood Showcase, I Was There, and They Live Forever. He was also writer, director, and producer, with Lee, of many radio and television shows, including Request Performance, Orson Welles Theatre, Frank Sinatra Show, Hallmark Hall of Fame, Halls of Ivy, and Times Square Playhouse. Lawrence, on his own, was the author of four books: Actor: The Life and Times of Paul Muni; A Golden Circle; Off Mike: Radio Writing by the Nation`s Top Radio Writers (editor and contributor); and Oscar the Ostrich: A Children`s Book for Adults.

Jerome Lawrence died of complications from a stroke on February 29, 2004, in Malibu, California.