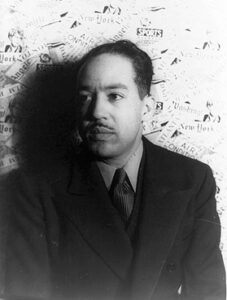 James Langston Hughes was born in 1901 in Joplin, Missouri, the son of James Nathaniel and Carrie Mercer (Langston) Hughes. While he was an infant, his parents separated and he moved to Lawrence, Kansas, where his grandmother raised him. When his grandmother died, he moved to Illinois for a short time before settling in Cleveland, Ohio. He attended Central High School, where he ran on the track team and was class poet, publishing poems in the school newspaper. After graduation, he lived for a year with his father, who had moved to Mexico. He then attended Columbia University for one year. He worked a number of jobs during this time and was also able to travel abroad. In 1926, Hughes published his first book of poems, The Weary Blues. He attended Lincoln University in Pennsylvania, where he earned a B.A. in 1929. His first novel, Not Without Laughter, won the Harmon Gold Medal for literature in 1930, thus inspiring him to pursue a career in writing. While writing prolifically during the 1930s, he also lectured across the country. During this time, he also became involved in liberal political movements, resulting in an investigation in 1953 by Senator Joseph McCarthy’s Senate subcommittee. Hughes published works in many genres, but was known primarily for his poetry. The Weary Blues contained one of his most famous poems, “The Negro Speaks of Rivers.” Some of his other poetry volumes were Fine Clothes for the Jews; Montage of a Dream Deferred; Selected Poems of Langston Hughes; and Ask Your Mama: 12 Moods for Jazz. In his poetry, he attempted to capture the experiences, emotions and spirit of everyday African Americans. He desired to tell stories that reflected black culture, including both its suffering and its joy. Langston Hughes died of cancer in 1967 in New York City. His home at 20 East 127th Street in Harlem has been given landmark status by the New York City Preservation Committee, and East 127th Street was renamed “Langston Hughes Place.”