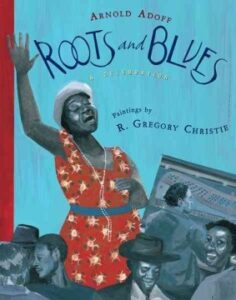 Poet, anthologist, and biographer, Arnold Adoff was born July 16, 1935, in New York City. He is the son of immigrants from a town near the Polish-Russian border whose family had been decimated by the Holocaust. Growing up in The Bronx, New York, Adoff began writing poetry at age 16 and going to jazz clubs. He attended City College of New York (now City University of New York) and received a B.A., 1956. He did graduate studies in History at Columbia University, 1956-58, and attended the New School for Social Research, 1965-67. In 1958, Adoff met Virginia Hamilton, an African-American woman who was in New York City pursuing a writing career. They were married in 1960. While reflecting on the marriage in a 2018 interview, Adoff stated, “Our marriage was illegal in 28 states. In a sense we were pioneers, but we didn’t see it that way. We were just living our lives.” After the couple had children, a daughter and a son, the couple moved their family to Yellow Springs, Virginia’s home town. They lived and worked there, sharing their commitment to writing children’s literature. Virginia Hamilton died of cancer in 2002. In 2010, Adoff edited, with Kacy Cook, Virginia Hamilton: Speeches, Essays and Conversations, a collection of writings by and about Virginia Hamilton that spans 30 years of the acclaimed author’s career.

Adoff is recognized for being one of the first and finest champions of multiculturalism in American literature for children and young adults, although, initially, he didn’t write poetry for that audience.  While teaching history at schools in Harlem and on the Upper West Side of Manhattan, Adoff began collecting poetry for his students. His first anthology, I am the Darker Brother: An Anthology of Modern Poems by Negro Americans (1968) was a groundbreaking work and The Poetry of Black America: An Anthology of the Twentieth Century (1973) was one of the largest anthologies of African-American poetry ever published in the United States. Much of Adoff’s own poetry portrays warm, affectionate family life. Based on his own family, Black is Brown is Tan (1973) was a groundbreaking title of juvenile fiction depicting a loving interracial family.  A jazz aficionado, Adoff’s love of the music and his “shape speech” writing style often result in verse that is innovative and inventive. His other books include: The Cabbages are Chasing the Rabbits (1985), Street Music: City Poems (1995), Slow Dance Heart Break Blues (1995), Touch the Poem (2000), and Roots and Blues: A Celebration (2011). Commenting on his poetry on his website, Adoff said, “I will always try to turn sights and sounds into words. I will always try to shape words into my singing poems.”

Arnold Adoff continues to work and live in Yellow Springs.

Additional Resources:
The Literary and Local Legacy of Virginia Hamilton and Arnold Adoff. From Dayton area’s National Public Radio station, WYSO, interviews of Hamilton (recorded in 1981) and Adoff (recorded in 1983 & 2017).