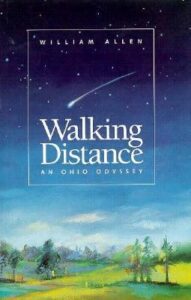 Born in Dallas, Texas, William Allen attended North Texas State University with famous classmates such as journalist Bill Moyers. After he received a BA in English from California State University at Long Beach in 1968, Allen was invited to be part of the University of Iowa Writers Workshop.

In 1972, Allen moved to Columbus to teach and coordinate the creative writing program at Ohio State University. In 1973, he founded The Journal (originally The Ohio Journal), the award-winning literary journal of The Ohio State University (OSU). “The Journal was his baby,” said David Citino (editor from 1985-1990), of Allen in a 1986 interview. “He started it from nothing.” The Journal has been in publication, continuously, since 1973.

While Allen is said to have been equally proud of his work as editor, teacher, and director of the distinguished Creative Writing Program at OSU, he considers himself first a writer, saying in a 1986 interview in The Lantern, “It validates who I am, as a teacher and director of the program.”

Allen’s writing career spans more than three decades. His published books and essays include fiction and nonfiction, history, humor, nature, and regional writing about his Texas background. He is the author of Starkweather: The Story of a Mass Murderer (1976); To Tojo from Billy-Bob Jones: a Novel (1977); The Fire in the Birdbath and Other Disturbances (1986); Walking Distance: An Ohio Odyssey (1993). Allen’s short stories, essays, and reviews have appeared in Antioch Review, Esquire, Saturday Review, The New York Times, and the Atlantic Monthly.