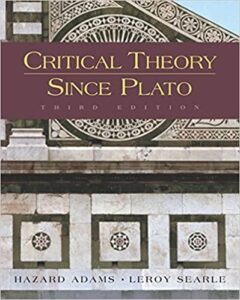 Hazard Adams was born on February 15, 1926 in Cleveland. Adams and his family moved to Seattle, Washington when he was eight years old. Adams received an A.B. from Princeton University in 1948 and received an M.A. and a PhD. from the University of Washington in 1949 and 1953 respectively. Adams is a leading scholar in the fields of English romanticism and literary theory and criticism; his most influential work, perhaps, Critical Theory Since Plato, was published in 1971.  In 1977, Adams joined the faculty of the University of Washington and became the Lockwood Professor of Humanities; he has been professor emeritus since 1995.

In a Library Journal interview Adams, reflecting on his writing career said, “My own interest in writing dates back a long way—to early childhood, when my father was writing poetry, and to third grade, when I had a teacher who encouraged all of us to write, and even published us. Poetry, I thought, was my game—after baseball, that is! But then there was a hiatus until one year at Princeton when I ruined my grade average writing in great secrecy a novel, of which, I am glad to say, not a scrap remains. After that, I turned to criticism and a scholarly career, but with an interest mainly in poetry, and particularly that of William Blake.”

One of the top scholars in the world on William Butler Yeats, William Blake, and James Joyce, his writings encompass scholarly studies, theoretical works, novels, poetry and memoir. Some of his publications include: Blake and Yeats: The Contrary Vision (1955), The Contexts of Poetry (1963), The Horses of Instruction (1968 novel), The Interests of Criticism: An Introduction to Literary Theory (1969), The Academic Tribes (1976), Philosophy of the Literary Symbolic (1983), Critical Essays on William Blake (1991), Home (2001 novel), The Offense of Poetry (2007) and Academic Child: A Memoir (2009).