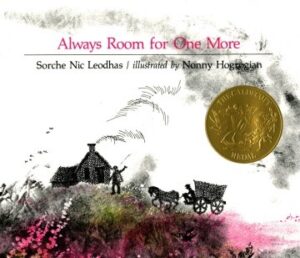 Born Leclaire Gowans on May 20, 1898, in Youngstown, Ohio, to Louis P. and Anna Gowans. Leclaire Alger wrote most of her books under the Gaelic pen-name Sorche Nic Leodhas (pronounced “Sore-ka Nik Le-oh-das”), which means “Claire, daughter of Louis.” Writing under the Gaelic pseudonym provided realism to her Gaelic tales and gave her the anonymity her shyness required.

As a child, Alger was schooled at home by her father and learned history, geography, and to read and write Latin, German, Italian, Spanish, and French. Alger began reading at age five, writing at age six, and sold her first story when she was twelve. Much of Alger’s writings were based on Scottish folk tales passed down in the oral tradition. According to Alger, collecting Scottish folklore was a family tradition going back generations on both her mother’s side and her father’s. The Gowans household preferred the unpublished folk tales and songs heard at clan gatherings and Gaelic Club meetings. The title story in her book All in the Morning Early (1963) was said to have been handed down in the Gowans family for at least three generations.

In addition to being a writer, Alger was also a librarian. She started work in 1915 as a library page at the Carnegie Library of Pittsburgh. In 1916, she married Amos R. Hoffman, but he died two years later. By the 1930 US Census, she is listed as being married for several years to John N. Alger, and the couple was living in Pittsburgh.

In 1921, the author moved to New York where she worked at the New York Public Library for four years. She then returned to Pittsburgh and attended the Carnegie Library School where she earned her certification as a librarian in 1929. Alger worked at the central Carnegie Library of Pittsburgh. While there, she served as the “Story Hour” Librarian one day a week and then went to school libraries, mostly in the city’s underprivileged areas, on the remaining days. It was with the children, according to her great-niece Jennifer Jill Digby, that Alger lost her shyness and conversed easily with them. In 1966, after having worked in library service for 37 years, Alger retired in order to write full-time.

Awards
1960 American Library Association Notable Book for Heather and Broom: Tales of the Scottish Highlands; 1962 Lewis Carroll Shelf Award and 1963 Newbery Honor for Thistle and Thyme: Tales and Legends from Scotland.  Always Room for One More, illustrated by Nonny Hogrogian, won the 1966 Caldecott Medal for excellence in illustration, children’s literature.

Additional Resources
Read Aloud: Always Room for One More. This charming story is derived from the Scottish folk song about Lachie MacLachlan whose kindness and hospitality proves to be more than his small house can hold. (Courtesy of Nonni Fink YouTube channel.)

Biography at the Pennsylvania Center for the Book