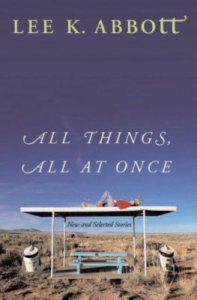 Lee Kittredge Abbott, writer and educator, was a professor of English for more than three decades, teaching at Case Western Reserve University in Ohio for twelve years before transferring to Ohio State University (OSU) in 1989 where he taught until his retirement in 2012.  Abbott was born in the Panama Canal Zone, on October 17, 1947, and reared in New Mexico, where most of his short stories are set. Abbott once described the American Southwest as “what I know…it’s a place where the firsts happened: first drunk, first sex, first death. It’s where I came to adulthood.” Abbott’s writing with its “invigorating prose,” “antic, smart-alecky style,” and “lush style of speech” earned much critical praise.

Abbott devoted himself almost exclusively to, and became a master at, the craft of short story writing. He was the author of seven highly praised and award-winning short story collections that include: The Heart Never Fits Its Wanting (1980), Love is a Crooked Thing (1986), Strangers in Paradise (1987), Dreams of Distant Lives (1989), Living After Midnight (1991), Wet Places at Noon (1997) and All Things, All at Once: New and Selected Stories (2006). He also collaborated with other writers, contributing to, along with other authors, published collections: The Company of Dogs (“Where is Garland Steeples Now?”) (1990); The Grateful Dead Reader (“Dead Reckoning and Hamburger Metaphysics”) (2000); The Putt at the End of the World (Chapter Four: “Never Up, Never In”) (2001); Letters to J. D. Salinger (2002) and Scoring from Second: Writers on Baseball (Foreword) (2007). Abbott’s short stories and essays appeared in The Best American Short Stories (1984 and 1987), The Atlantic, Georgia Review, Harper’s, Kenyon Review, Ploughshares and Story Quarterly.