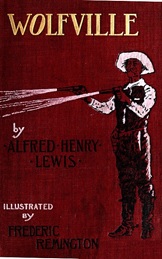 The son of Isaac Lewis (a carpenter), Alfred Henry Lewis was born January 20, 1855, in Cleveland, Ohio.  At the age of 23, Lewis was a prosecuting attorney for Cleveland; but, in 1881, he decided to give up legal work to become a journalist. He was employed as a staff reporter for the Chicago Times and later became editor of the Chicago Times-Herald.

In 1893, Lewis’s first book, Wolfville: Episodes of Cowboy Life, was published. Other books followed including those of the Wolfville series: Wolfville Days; Wolfville Nights and Wolfville Folks.  Lewis also wrote numerous magazine articles and short stories concerning the social issues of his day. His articles and stories were published in noted magazines such as Cosmopolitan, Collier’s, Times, and Pearson’s Magazine.

Alfred Henry Lewis died on December 23, 1914.  In his lifetime, he was a lawyer, an investigative journalist and editor, a novelist, and short story writer. His other publications include The Boss; The President, A Novel;  An American Patrician; The Sunset Trail; The Throwback; The Black Lion Inn; Owners of America; A Trust in Agricultural Implements; and The trial of the Viper.