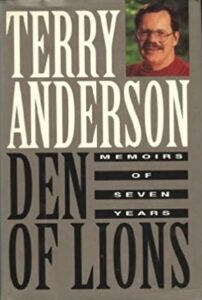 Terry Anderson is a retired journalist and former foreign correspondent in Asia, Africa, and the Middle East. He served as Chief Middle East Correspondent for the Associated Press and has worked as a newspaper editor, television and radio reporter, and documentary producer. Anderson is the author of the best-selling memoir, Den of Lions, an account of his experience as a hostage in Lebanon for nearly seven years from 1985 to 1991.

Anderson was born in Lorain, Ohio, in 1947 and raised in Batavia, New York. He served as a combat journalist for six years in the United States Marine Corps and served two tours of duty in Vietnam during the Vietnam War. After he was discharged from the military, he enrolled at Iowa State University, graduating in 1974 with double degrees in journalism and political science. Then he joined the Associated Press, serving in Asia and Africa before being assigned to Lebanon as the chief Mideast correspondent in 1983.

Anderson holds numerous awards for his volunteer and charitable work. In 1993, he co-founded, with Vietnamese-American actress Kieu Chinh, the Vietnam Children’s Fund, a non-profit foundation, located in Unionville, VA, to help the children of Vietnam. Anderson once stated in an interview the he wanted to give back to the country he got to know as a U.S. Marine fighting in the war. In 2001, Anderson established the Father Lawrence Martin Jenco Foundation, named after the late Roman Catholic priest and Lebanon hostage (released five years before Anderson), to support people who do charitable and community service projects in Appalachian Ohio.

Anderson spent more than ten years teaching journalism at several universities including Syracuse University, Ohio University, University of Florida, and the Columbia School of Journalism. He holds numerous awards in journalism and served as an honorary co-chairman of the Committee to Protect Journalists which monitors attacks on journalists around the world.

Additional Resources
Terry A. Anderson from Wikipedia. Learn more about Terry Anderson and access the link to his appearances on C-SPAN.