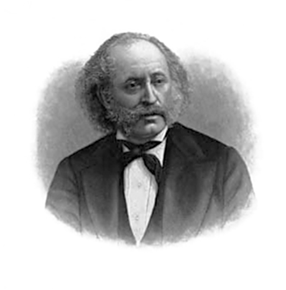 American Reform rabbi, author, and editor, Isaac Mayer Wise was born in Steingrub, Bohemia (now Lomnička, Czech Republic) in 1819, the son of Leo Weiss, a school teacher, and Regina Weiss. He was a prominent and influential rabbi in 19th-century America. A brilliant student, Wise received his Hebrew education from his father and grandfather, a physician. After the death of his grandfather, Wise continued his studies of the Talmud and the Bible at various schools. For three years, he attended the University of Prague and the University of Vienna to complete his secular and Hebrew studies. He received his rabbinical certification from the Prague bet din and, in 1843 at age 23, he was appointed rabbi at Radnitz, Bohemia. Rabbi Wise later married Therese Bloch, and they would have ten children together. Therese died in 1874 and Rabbi Wise married Selma Bondi in 1876, and the couple had four children together. He remained in Bohemia until he decided to leave for America. Once Rabbi Wise immigrated to the United States, he worked tirelessly on behalf of Reform Judaism and would establish the Union for Reform Judaism (formerly Union of America Hebrew Congregation), the Hebrew Union College, and the Central Conference of American Rabbis. He would also publish 25 books that included fiction as well as nonfiction.

Wise was appointed rabbi of the Congregation Beth-El of Albany, New York, in 1846, where he made reforms such as family pews in the synagogue, sermons in the vernacular, and mixed choir and confirmation. Beth-El was the first Jewish congregation in the United States to carry out these innovations which many in the congregation thought were too radical. This led to Rabbi Wise’s dismissal in 1850. Soon afterwards, a group of congregates left Temple Beth El and, with Rabbi Wise, established a new Reform synagogue known as Anshe Emet (“men of truth”). In 1854, Rabbi Wise moved to Cincinnati, Ohio, to become rabbi of Beth K. K. B’nai Yeshurun, a Reform congregation.  He would remain there for the remainder of his life. Since 1931, the temple has been renamed the Isaac M. Wise Temple.

Rabbi Wise advocated a union of congregations; and, in 1873, the Union of American Hebrew Congregations (UAHC) was established. In 2003 UAHC, changed its name to the Union for Reform Judaism. Rabbi Wise worked tirelessly for a college to educate and train American rabbis. In 1875, the Hebrew Union College was founded. Rabbi Wise pushed for a common prayer book and, in 1889 with his guidance, the Central Conference of American Rabbis was formed.

Rabbi Wise wrote more than ten books of Jewish history and theology, eight novels in English and three in German, and two plays. He also produced a prayer book called Minhag America, meaning “the custom of America.” Many of his novels were first published as serials in The Israelite newspaper. His nonfiction includes The History of the Israelitish Nation from Abraham to the Present Time (1854), The Essence of Judaism: For Teachers & Pupils, and for Self-Instruction (1861), and The Origin of Christianity, and a Commentary on the Acts of the Apostles (1868). His fiction published in English includes The Convert (1854), The Last Struggle of the Nation (1856), The First of the Maccabees (1893 or 1894). His German language novels first appeared as serials in the Jewish American periodical Die Deborah; they include: Die Juden von Landshuth, Der Rothkopf, oder des Schulmeisters Tochter, and Baruch und Sein Ideal. Two plays were also published in Die Deborah: Der Maskierte Liebhaber and Das Glueck Reich.

Non-Fiction
The Cosmic God: A Fundamental Philosophy in Popular Lectures (1876)*
Judaism and Christianity, Their Agreements and Disagreements: A Series of Friday Evening Lectures, Delivered at the Plum Street Temple, Cincinnati, Ohio (1883)*