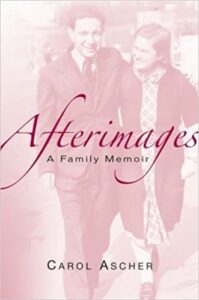 Three weeks after her parents, Paul (a psychoanalyst) and Ellen Bergman, arrived in the United States after fleeing the Nazi regimes of Central Europe, Carol Ascher was born in Cleveland, Ohio.

Ascher and her family lived in Topeka, Kansas, until she was twelve. The comforts of that Midwestern existence were not enough to shield her from the pressures of assimilation and the world of her parents and their friends, who were also Jewish refugees. Of her childhood, Ascher has said that she grew up in a divided world and learned to have “a kind of double vision—to be both an American girl and the wary child of immigrants.” It is this childhood that informed the writing of her memoir Afterimages: A Family Memoir (2008) and her novel The Flood (1987). Ascher’s work is wide-ranging and includes novels, memoirs, short fiction, essays, book reviews, as well as scholarly books and articles. Her writings often explore issues of prejudice and inequality.

Carol Ascher attended Vassar College for two years (1959-61) and, in 1963, she completed her B. A. in Anthropology and Religious Studies from Barnard College. Ascher married Phillip Lopate in 1964, but they divorced in 1970. In 1974, Ascher earned a Ph.D. in Anthropology and Education from Columbia University. Educated as a cultural anthropologist, Ascher has spent much of her professional life teaching, researching, and writing about urban public schools. Her nonfiction works include Simone de Beauvoir, A Life of Freedom (1981); Hard Lessons: Public Schools and Privatization (1996); and numerous essays and articles.

Additional Resources
Carol Ascher. Learn more about the author at her personal website.