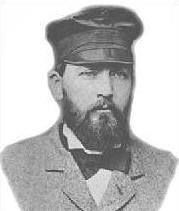 Januarius A. MacGahan, considered one of the most influential journalist of the 19th century was born on June 12, 1844, near New Lexington, Ohio. The son of James and Ester (nee Dempsey) MacGahan, Januarius was only six years old when his father died, leaving the family in very difficult circumstances. MacGahan began working on farms in Hocking, Fairfield, and Fayette counties when he was fourteen. He later traveled to Huntington, Indiana, where he became a teacher. In 1863, MacGahan moved to St. Louis, where he worked for four years as a bookkeeper and newspaper writer. In 1868, he went to Europe to study Latin, German, and French, with the goal of eventually returning to the United States to practice law. While he was in Europe, the Franco-Prussian War broke out, and he was hired by the New York Herald to join the French Army as a war correspondent. MacGahan became renowned in this field and also procured an engagement with London’s Daily News to investigate reported atrocities in Bulgaria by Turkish forces. Because of those dispatches to the Daily News, MacGahan was considered a hero by the people of Bulgaria who bestowed upon him the title “Liberator of Bulgaria.” Those dispatches were collected in a volume called The Turkish Atrocities in Bulgaria: Letters of the Special Commissioner of the “Daily News” (1876). MacGahan experienced numerous adventures during this time period as he took a virtually fearless approach to the dangers surrounding him. His other works include Campaigning on the Oxus, and the Fall of Khiva; and Under the Northern Lights. MacGahan was married to Barbara D’Elaguine and they had one son, who was born in Spain in 1874.

Additional Resources
Januarius A. MacGahan, from Wikipedia. Learn more about his adventures and access a link to his bibliography.