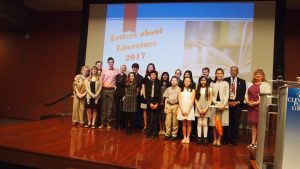 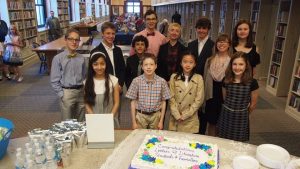 A National Reading and Writing Promotional Program for Children and Young Adults.

The Center for the Book in the Library of Congress, in partnership with and in cooperation with affiliate state centers for the book, invites readers in grades 4 through 12 to enter Letters About Literature, a national reading-writing contest. To enter, readers write a personal letter to an author, living or dead, from any genre– fiction or nonfiction, contemporary or classic, explaining how that author’s work changed the student’s way of thinking about the world or themselves.

The 1,340 Ohio students in Grades 4-12 that participated in the Letters About Literature 2016/2017 contest resided in twelve counties: Allen, Cuyahoga, Delaware, Franklin, Hamilton, Medina, Mahoning, Portage, Pickaway, Summit, and Stark. Of the 1,340 students, 422 were from Level I (grade 4-6); 494 from Level II (grades 7 & 8), and 424 from Level III (grades 9-12).  Our deepest thanks are extended to each and every teacher and parent who sponsored a student. We’d also like to thank the judges for this year’s contest: Linda Feagler, Senior Editor, Ohio Magazine; Shayna Muckerheide, Manager, CPL Lorain Branch and William Spencer, CPL Librarian, docent and concierge. Finally, we thank Cleveland’s Friends of the Library and the Center for the Book in the Library of Congress for their support.

Honorable Finalist: Cassidy (“Cassie”) Cox (Grade 9: Ursuline Academy, Cincinnati. Sponsor: Dr. Anne Hinkle) Letter to Pakistani activist and Nobel Prize laureate Malala Yousafzai concerning her autobiography, I Am Malala: The Girl Who Stood Up for Education and Was Shot by the Taliban