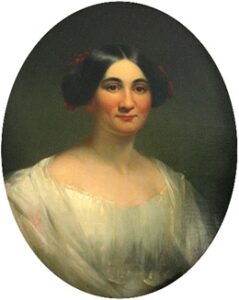 Phoebe Cary was born in 1824 in Mount Healthy, Ohio, one of eleven children of Robert and Elizabeth Jessup Cary. She grew up on a farm and had little formal education.

Under the tutelage of her older sister Alice, she developed a great love for literature and eventually for writing. In 1850, the two sisters published a book entitled Poems by Alice and Phoebe Cary. Alice moved to New York City that same year and Phoebe with Elmina, another sister, joined Phoebe in 1851. Phoebe, whose writings consist mainly of poetry and hymns, was not as prolific a writer as Alice. She compiled and edited Hymns for All Christians (1869) and published two books of poetry, Poems and Parodies in 1854 and Poems of Faith, Hope, and Love in 1868. Her lyrics appeared in numerous church hymnals. “Nearer Home” is probably her most famous and well-loved hymn.

Recommended
A Memorial of Alice and Phoebe Cary with Some of Their Later Poems, compiled and edited by Mary Clemmer Ames (1873) Source: Internet Archive