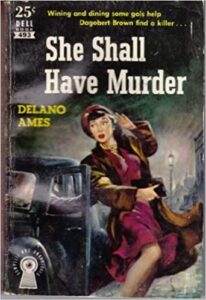 Delano Ames was born in Mount Vernon, Ohio, on May 29, 1906.  He was the son of Benjamin and Isabel Cooper (nee Kirk) Ames. Delano’s father was a prominent businessman in Knox County, but moved the family to New Mexico in 1917.  As a young man, Ames attended schools in the eastern United States, including Columbia University. In 1929 Ames married novelist Maysie Coucher Grieg; they divorced in 1937. Ames left the United States in 1937 for England, where he met his second wife, Kathleen “Kit” Woodard; they married in 1942. Ames lived most of his life in Europe and considered England his home.

A prolific writer, Ames was a novelist, editor and translator who wrote short stories and articles for British magazines. He published more than 25 books. In 1932 his first book, They Journey by Night was published; it was followed by No Traveller Returns (1934) and A Double Bed on Olympus(1936).  Ames is best known for the Jane and Dagobert Brown mysteries featuring a British detective couple, and the Juan Llora Spanish mystery series about a sergeant in the Spanish Civil Guard who solves mysteries

Additional Resources
Delano Ames. Learn more about his life and career via Wikipedia.