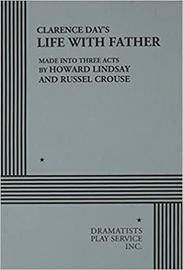 Russel M. Crouse was born in Findlay, Ohio, on February 20, 1893, the son of a newspaper publisher. Well-known for his sharp wit and outrageous puns, Crouse worked for nearly 20 years as a reporter for newspapers in Kansas City, Cincinnati, and New York. For five years, Crouse was a press agent for the Theater Guild and had written four plays by 1934 when he was tapped by Howard Lindsay to collaborate on the book for the Cole Porter musical Anything Goes. This collaboration marked the beginning of the longest, most profitable, and most congenial writing partnership in theatrical history. Crouse and Lindsay celebrated the thirtieth anniversary of their collaboration in 1964. 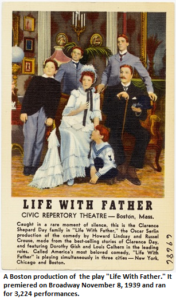 It was generally agreed that Lindsay had a greater knowledge of the theater, while Crouse had the keener sense of humor. The rewrite of Anything Goes was done in ten days, the show was a hit, and the two men followed it with Red, Hot and Blue (1936), which brought Bob Hope to stardom. Their first nonmusical play, an adaptation of Life With Father (1945), was wildly successful, running eight years and leading to a motion picture and television series, with many episodes written by Crouse and Lindsay. Their satire on American politics, State of the Union (1945), was so timely that lines had to be changed from day to day and it won the Pulitzer Prize in 1946. The biggest box-office receipts came with The Sound of Music (1959), which they adapted from Maria von Trapp’s story. It was enormously popular on stage, and later became an award-winning motion picture. The team also produced several plays including Arsenic and Old Lace (1940). Besides writing, producing, and acting in plays and musicals, Crouse and Lindsay founded the New Dramatist Committee to help budding playwrights break into the business. They also established the Dramatists Play Service, ending the monopoly of Samuel French in printing bound copies of plays for rehearsals. Crouse was active in the Dramatists Guild of America‘s Authors League, and was president 1943-45. His first wife, Alison Smith, died in 1943, and two years later Crouse married Anna Erskine with whom he had two children.