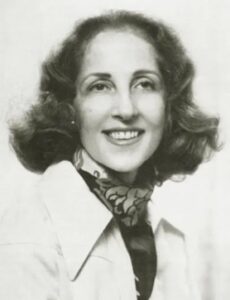 H. M. Hoover, the pen name of author Helen Mary Hoover, was born in 1935 in Stark County, Ohio. The daughter of Edward Lehr and Sadie (Schandel) Hoover graduated from Louisville High School in 1952 and attended Mount Union College in Alliance, Ohio. She worked as a secretary in Alliance and Canton before moving to California in 1956 to attend the Los Angeles County School of Nursing. After six months of study, Hoover decided not to pursue a nursing career and worked various office jobs while continuing her education at the Los Angeles City College. In 1960, Hoover moved to New York City where she was employed as an office worker until, in 1969, she decided to pursue a writing career. Hoover had been raised in a household filled with books. Her parents were teachers who instilled in their children the love of books, as well as reverence for nature, and a concern for the future of planet Earth (two recurring themes in her books). “H. M.” was used as her pen to avoid confusion with the American nature writer Helen Hoover.

H. M. Hoover published twenty books for children and young adults. Her first book, Children of Morrow, was published in 1973. Her second book, The Lion’s Club, a historical novel set in Russia, was published in 1974. Hoover chose to write science fiction because she enjoyed the world-building that the genre allowed. In 1976, she returned to the genre with Treasures of Morrow, a sequel to her first book. Hoover eventually moved to Virginia where she continued to publish science-fiction that included The Delikon (1977), The Rains of Eridan (1977), The Lost Star (1979), Return to Earth: A Novel of the Future (1980), The Bell Tree (1982), The Shepherd Moon: A Novel of the Future (1984), Orvis (1987), The Dawn Palace: The Story of Medea (1988), Away Is a Strange Place to Be (1990), Only Child (1992), and The Winds of Mars (1995). Hoover left fiction only once to write The Whole Truth – And Other Myths: Retelling Ancient Tales (1996) which retells well-known classical myths using works of art located in the National Gallery of Art as illustrations. It was her last published book.